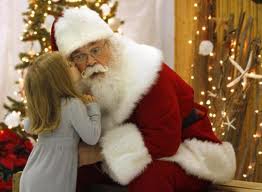 We’ve been working and planning for a while, but now that Thanksgiving has past you’re probably starting to gear up for the holidays. To help, on Saturday, Dec. 6, Binleys will be hosting a Christmas Open House. We’ll have a free seminar on making and decorating wreaths at 11 AM. Following the free session, for a $15.00 fee, Bilye-Jo will help you custom decorate a wreath to take home. Santa will be here from 1 to 4 PM, so be sure to bring the kids for a free photo with Santa.

To make the day really special, Binleys will give away a free 10 inch wreath with the purchse of any Christmas tree over $30.00. We will be accepting donations for Toys-for-Tots all weekend. With each donation of a new unopened toy, Binleys will give you a $10.00 gift certificate to be used anytime in 2015.

Save the Date: Fall Mum Festival 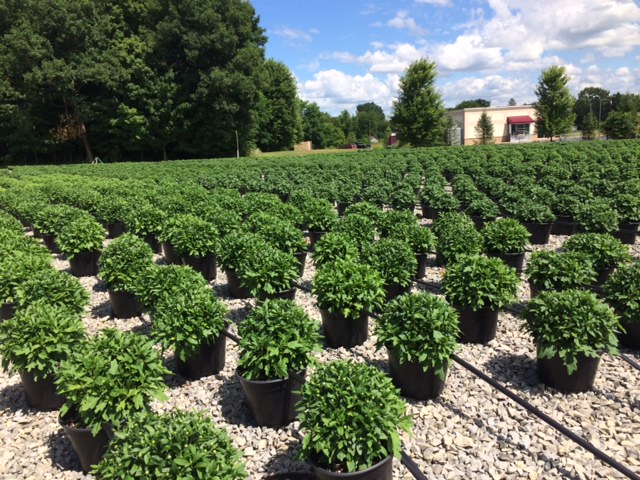 Binley’s annual Fall Mum Festival will be on Saturday, September 13, 2014. We’ll have craft venders, antique cars, pony rides and alpacas plus thousands mums and tons of pumpkins.  WCKM radio morning guys Dan and Pete will be here. This is a fun event and you won’t want to miss it.

Speaking of mums, this is what our mum field looked like on the last week of July. They’re right on schedule to become the colorful, spectacular fall giants we’re famous for.

Here’s something unusual, flowers that look like something else 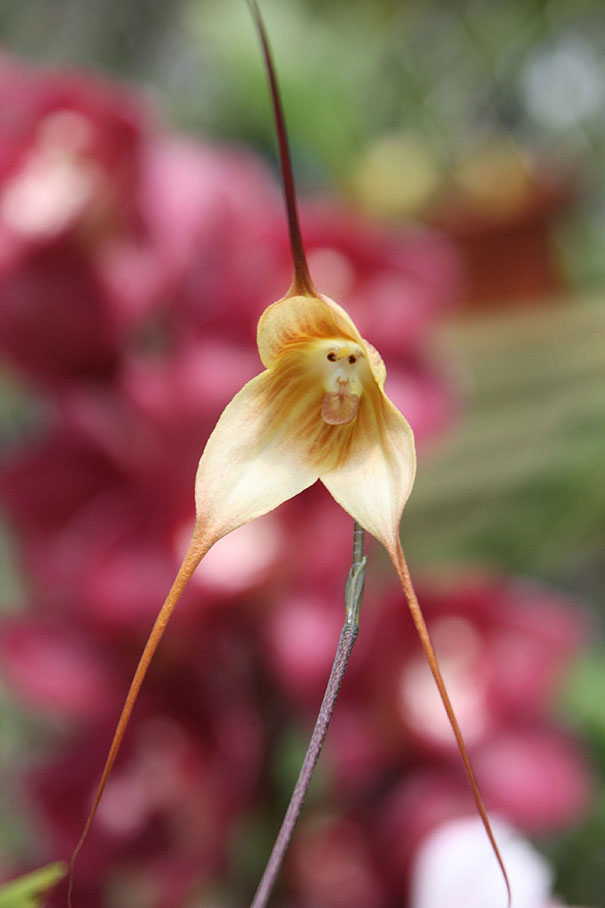 The flower, as a reproductive organ, evolved with one primary purpose in mind – to attract pollinators like insects or birds. This function has driven their astounding evolutionary explosion of distinct colors and shapes, some of which have even come to resemble various recognizable figures, plants or animals.

The colors of these flamboyant orchids attract insects and birds, signaling that these flowers are full of tasty nectar. Their shapes, on the other hand, often evolve to attract or accommodate specific pollinators while dissuading parasites or other, less desirable pollinators. Some flowers are more welcoming to bees, while others are perfect for hummingbirds or different insects.

Their stunning colors and biodiversity have attracted another type of creature as well – us. Orchid lovers value flowers like these for their resemblance to other recognizable objects which, while coincidental, is still definitely entertaining! Click on this link.

Well, that’s all for this month. I hope we’ve touched on something that got you thinking. Until next time, happy gardening.

This has been an interesting month. I was contacted by someone compiling the history of the Binley family. They were hoping to gather some background info on the family. Unfortuanly, I’m not related to the Binleys (although they’re still customers here). My father, Al Hirsch came to work here in 1932 and later became partners with Mr. Binley and, upon his death, bought his family out.

While we do have some photos and records, much was lost in a fire in 1971. The researcher had some wonderful photos that she shared with me and I’d like to share with you. Most were believed to be taken in the early 1900’s and the 1920’s, with exceptions as noted.

Binleys was started in 1893. My photo supplier had several pictures (unlabeled) of a gentleman believed to be Binley founder, Arthur J. Binley, one in the greenhouse and the other in an outdoor bed that had peonies that were grown for cut flowers.

There are 2 views of the greenhouses from the early 1900’s that were on Grant Ave. in Glens Falls until the fall of 2005. One shows a young girl outside the primative older greenhouses and the second shows two young boys in the same greenhouse. The boy closest to the camera was son of Mr. Binley destined to be the future owner and my father’s partner.

Two other pictures show the inside of Binleys store on Glen St. in downtown Glens Falls. The space is now part of the Scoville Jewelers building. The first is looking towards the front of the store (towards Glen St.). Note the sign painted on the front window “Binley Flowers”. The second looks to the rear of the store and shows the counter and the flower cooler that used ice as the coolant. This cooler was later moved to our Grant Ave. store and used as a display piece until that store was closed.

The gentleman standing with the large football mums is Arthur S. Binley (the same little boy that was in the greenhouse picture). He was my father’s partner.

The last picture was sent to me by Mike Muller. It shows the view across the street from our Glen Street store when it was opened in the early 1890s, before there were any cars. Note the corner of (now) Davidson’s Brew Pub and Amies Dinner and Movie (formly Fowers Dept. store) buildings.

I hope you enjoyed this bit of our history. These pictures and some other dating back through the history of Binleys are on our website. Click here for the link. 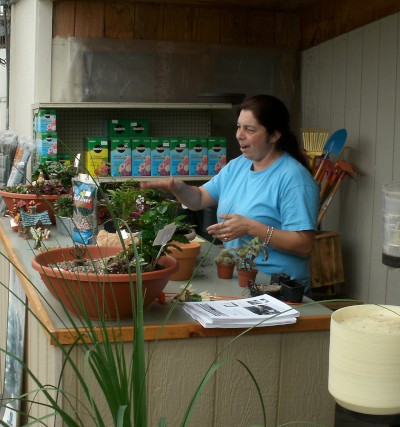 Picking up Dot’s theme of fairy gardening, Bilye Jo Gilligan, one of our full-time employees and my go-to person when something needs to get done, gave a presentation to a local garden club on fairy gardening. About 15 members were there to learn some of the techniques and secrets of creating a miniature garden.

Binleys carries a nice selection of miniature gardening items, including, but not limited to, houses, furniture, fencing and of course, all types of plants that help create the perfect environment for these tiny friends. By the way, if your group or club would like a presentation, Binleys can cover most any topic relating to gardens or to flowers. Past presentations have covered wreath making, floral design, perennials and even cooking with herbs. If you’re interested, give us a call.

As you can see we have lots of ideas to help you get your gardening and flower fix. Until next issue, happy gardening.