Holiday cheer. Poinsettia is perhaps the most common plant gift of the Christmas season. It is colorful, traditional and looks like it should be tough to withstand any conditions in the home. Many recipients assume that it will last for months in the home environment. Cared-for properly and the poinsettia will give weeks of color and pleasure to its owner. 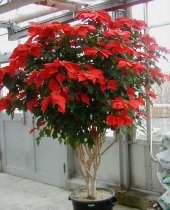 But, it can be challenging to grow poinsettias in the home under normal house conditions. Many homes are kept too hot, causing the air to dry out and leaves to drop. Occasionally the plant was fertilized in the greenhouse only minimally. Or the plant may have gotten a draft in the store where it was sold. If the plant already had leaves with a yellowish cast to them when you received it, then they will not last long into the winter. Often the red, white or pink bracts (often thought of as the flower itself) will stay on the plant longer than the green leaves.

Perhaps the most important thing you need to care about is proper watering. The plant was often grown in a greenhouse in its pot, with a sophisticated watering system or trained greenhouse workers who watered it properly. Then it was sent off to the retail market for sale.

If it stayed at the retail market more than a few days, it probably got watered a little less than perfectly. It was the holiday sales season, with busy shopkeeper, afterall. Then it was sold and the first thing they probably did was wrap colorful foil around the pot to make it more attractive as a gift. Then the problem really began.

Every time after that when it was watered, the excess water was trapped inside that colorful foil around the pot. So the first thing you need to do to care for your holiday Christmas poinsettia is remove the foil. Set it on a plastic tray or ceramic dish to protect your furniture or sill.

Keep the soil damp but not sopping wet. The dampness should feel cool to the touch. Lift up the pot after you have watered it. Take note of the weight of the pot with freshly watered soil. The weight will get lighter as the water is absorbed by the plant roots, but there reaches a point when it gets so light weight that is noticeable. It almost feels like a feather when it is dry. At that point, too, the soil actually has changed color from the dark (almost) black color of wet soil to a medium brown color of dry soil.

Of course, that comes with experience to know what that "in-between" feel and color is like. How do you get that experience? Get in the habit of feeling the soil every day. Once you have removed that colored foil around the pot, it will be easier to get your finger down there to feel the top of the soil. It's takes 5 seconds of your time.

That damp feel (I call it towel-damp) should be as uniform as possible each day. Catch it before it starts going dry, but if you always have that cold, wet feel then the plant roots are so stressed with all that extra water surrounding them that they begin to go into a kind of shock. That may be when you start seeing lower leaves drop off from over-watering. They may or may not turn yellow before they drop off. You may even see the flowers and leaves drooping, looking like they are wilted. (See picture above.)

Interestingly enough, lower leaves also drop off if you let the soil get too dry. Flowers and leaves can droop when they are under-watered, too. In fact, that's when they really are wilted. What you see (yellow leaves, dropped leaves, drooping or wilting) all looks the same to the untrained eye, but the cause could be as different as too much water or too little water. Only you will know which it is.

Whenever you do water the plant, water it thoroughly until the water drips out of the holes at the bottom of the pot. That's what the holes are there for. Most people take the poinsettia to the kitchen sink to water it properly. Anyone who gingerly tries to water the plant with the pot sitting in its tray or dish on the living room end table will know that it is almost impossible to give the plant a thorough watering when you are more worried about spilling onto the furniture or getting the water into the pot evenly.

Now how often should you water? It would be simple to give you a formula or routine here, but I will resist. In a greenhouse, where the temperature and air movement is more controllable, the commercial grower may have a predicable schedule. But in the home, there is inconsistency. Some homes are kept warmer than others. Sometimes you move the plant to a warmer or cooler spot for display. Displaying it in a window might be different from displaying it in a dark corner of the room. Sometimes the door opens more often over the holidays putting the poinsettia in a draft. You will just have to monitor the plant for yourself and figure out how often it needs water -- by touching the soil, color observation and how heavy the pot feels. You

are probably saying right about now that you can't win. But you can. The majority of poinsettia caretakers at home do get it right. They do win the game of proper watering. Not too wet, not too dry, just right in-between. Enjoy.