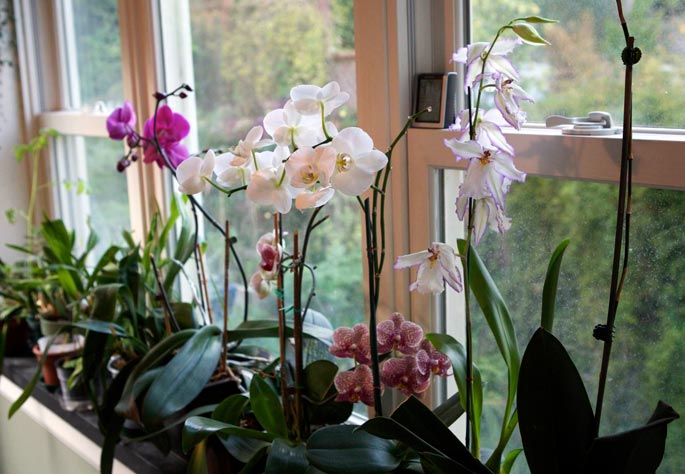 The fall season for orchids is an important one. It is when where a great number of the orchid plants need care as well as a change in the basic requirements. Most orchids use this season as a "rest period" to get ready to produce blooms in the winter or spring.

From the summer season to the fall there is a less a requirement for water as the temperature decreases. You will need to monitor this closely. Don't forget it you see wrinkling on the leaves this means that you need more H2O.

As a general rule, this time of the year requires the use of an orchid fertilizer, richer in phosphorous to boost the bloom potential. This means that there is higher percentage in nitrogen-phosphorous-potassium in the fertilizer mixture. As you use fertilizer on the orchid plants use it as half strength and generally once a week.

The temperature is also getting cooler in most parts of the country during the fall. So if you have plants outdoors you may start to think about getting them indoors. Most orchids can do well in with temps in the 50's and few do OK into the forties. I like to suggest that your plants come inside when the night temps are in the mid fifties. Also, if you are bringing your orchid indoors from being outside, check carefully for any pests that may be clinging to the plant.

Now let's get to some specifics for some of the different genera. For cattleyas this growth rate will tend to slow as the fall progresses. The sheaths on the catts will show some changes indicative of blooming over the next six months. Don't forget the fertilizer and watering. These plants do well in bright lighting.

Cymbidiums may start blooming in the fall and they need to be in shaded cool areas. Cyms have a genetically based warmth tolerance but for the best blooms they need an area that is shaded and somewhat cooler. The spikes with flowers, called inflorescence, will need to be staked to prevent the heavy flowers from weighting down the spike.

Phalaenopsis are just starting to go through the next stage to bloom in the late winter and spring. They need the cool difference in daytime and nighttime temps. It is recommended that there be about a 10 - 15 degree Fahrenheit difference.

Phalaenopsis also need to be watered and fertilized less often during the first few months of fall. They are resting. It would helpful to give them a fertilizer with a higher phosphorous percentage to help boost the blossom potential. This fertilizer is also called "blossom booster".

Dendrobiums also need a "blossom booster" as well at this time of the year. Remember their flowers are usually plentiful and grow toward the top of the spike making them top heavy. Use a stake to help hold them erect and be sure that the pot is heavy enough to keep itself upright.

The green leaved Paphs are also getting ready to have flowers. The shafts are displaying the spikes. Be careful with these orchids as a sudden heat spell will prove disastrous to the new blooms. Keep them in a cooler area and with good air circulation.

Paphs don't like to get dry so be careful with watering. If you were watering twice a week, try cutting down to once. But while doing this test your medium with the dry tip of a pencil. Stick it down about an inch or two into the pot, if the tip comes out wet you are fine.

This should help you to have great orchids both in the fall season and beyond.

Thanks for reading and remember to mark September 14 on your calendar.